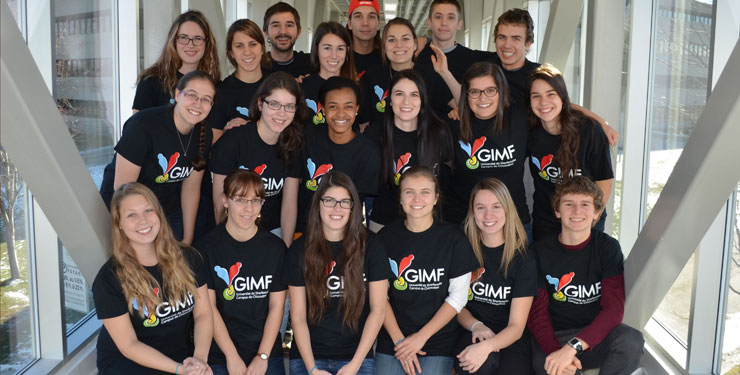 Family medicine has been hogging the spotlight since the beginning of year and, despite the political turmoil framing general practitioners in Ontario and in Quebec, a growing number of graduating Canadian medical students are ranking it as their first choice specialty. This sudden burst of popularity is entirely owed to the concerted promotional efforts of various medical organizations since the early 2000, when admissions to family medicine residency programs were hitting a historic low. One of the most inspiring initiatives is the creation of the Family Medicine Interest Groups (FMIGs) by the College of Family Physicians of Canada (CFPC), supported by its provincial branches, the faculties of medicine across the country and various like-minded organizations, such as Health Canada and the Quebec Federation of General Practitioners (FMOQ).

Entirely run by medical students on a local level since 2003, FMIGs are present in all of the 17 Canadian medical schools, and some distributed medical education sites (DMEs) even have their own chapter. Supported by local resident physicians and physicians, FMIGs are running in an auxiliary fashion of the official curriculum to increase the exposure to family medicine and to promote its practice. Although local chapters are independent from each other, biannual meetings are organized by the CFPC’s Section of Medical Students (SOMS), usually at the Family Medicine Forum and at their headquarters, to coordinate efforts to improve the image of family medicine in medical school.

Agents of social change
Although these scheduled meetings are usually a forum for FMIG chairs to exchange about hits and misses, the political landscape in Canada dictated most of the agenda of the last meeting held on March 28th at the CFPC office. The famed Bill 20, devised by Quebec Health Minister Dr Gaétan Barrette, faced vocal opposition not only from the population, but also from the medical community. FMIG chairs in Quebec, in partnership with the Quebec Federation of Medical Students (FMEQ), were quick to coordinate media reach out efforts and public rallies—including the main one in Quebec City that attracted 1,000 students—to voice the concerns of their members. Annick Gauthier, co-chair of the McGill FaMSIG, took the opportunity to summarize to dissuading effect of the bill on the aspirations of medical students. “A survey of medical students [at McGill] showed that 91% of them would choose family medicine because of its diversity,” she reminded. Although this year’s residency match statistics did not show Quebec students massively avoiding family medicine, an aftermath is to be expected if the bill was to ever be adopted.

In the meantime, medical students are more than ever involved in FMIGs: from community reach out to educational initiatives, local chapters are bringing family medicine to the classrooms with talks by practicing physicians, clinical skills sessions and mentorship opportunities through formal and less formal settings, such as dinners. Aside from these trademark activities, various FMIGs also organized field trips to family medicine clinics, sometimes even in remote and rural regions! However, the FMIG of the University of Saskatchewan took its mission a little further by bringing family medicine to their community. As explained during an exchange session by the current chair, Cheyanne Vetter, the Teddy Bear Clinic is a peer-education project that “brings the family physician’s office to elementary schools.” With the help of plush teddy bears, FMIG members run workshops to explain to inner city children how visits to a family doctor’s office happen. Currently operating in Regina and Saskatoon, other cities might join this student-run initiative given the interest expressed by other FMIG leaders.

Collaboration and partnerships
FMIG members, on top of being active promoters of the specialty, are also establishing connections with other academic and professional organizations that share the same passion. Thanks to these partnerships, delegates at the meeting were able to discuss with physicians from the CFPC and from the Nova Scotia Department of Health and Wellness. Drs Francine Lemire and Garey Mazowita, respectively CEO and President of the CFPC, reflected on the current state of postgraduate education in family medicine, questioning the need to lengthen the residency training from two to three years. Dr David Gass, on the other hand, flew in from Halifax to discuss the rationale behind the new ruling of the Supreme Court of Canada about physician-assisted suicide. Although these sessions were rather short, the FMIG members were more than eager to take part in the upcoming challenges in family medicine.

Family physicians being the gatekeepers of the health care system, it is not surprising that most political and legal decisions will directly affect their practice, and this can be a deterrent to many successful candidates. Given the current political landscape—family physicians in Ontario being busy with the “Care, Not Cuts” campaign while their Quebec colleagues are fighting Bill 20, it is more than necessary for physicians-in-training to get involved at an early stage to promote one of the most essential specialties in modern medicine. With a little more than 10 years of existence, FMIGs have successfully overgrown their initial mission of promoting family medicine: they are now also preparing medical students for their future career.

Thanks to the tremendous year-long support of the Fédération des médecins omnipraticiens du Québec (FMOQ) for allowing Première Ligne to become the voice of Quebec’s FMIGs, and also to the constant help of the College of Family Physicians of Canada (CFPC) for recognizing the importance of media reachout in family medicine.

Special thanks to Pamela Cirino, CFPC’s Coordinator of Medical Student Affairs, to Sara Porisky and Wilfrid Chan, co-chairs of the CFPC’s Section of Medical Students, and to all Canadian FMIG delegates for greeting me at their business meeting.

However, none of this would have been possible without the mentorship of Dr Martin Labelle and Marie Ruel at the FMOQ, the magic wand of our web fairy Catheline Moreau who gives family medicine a face, the collaboration of our local Quebec FMIGs and their chairs and, of course, the diligence of our staff writers, Kamy, Léa, Samuel, Marie-Laure, Catherine and Gabrielle.

Thank you to all for enlightening me about family medicine. Hope to see you at the 7th Annual Family Medicine Student Symposium, held in Sherbrooke (Quebec) in September 2015, and at the 2015 Family Medicine Forum in Toronto in November 2015!